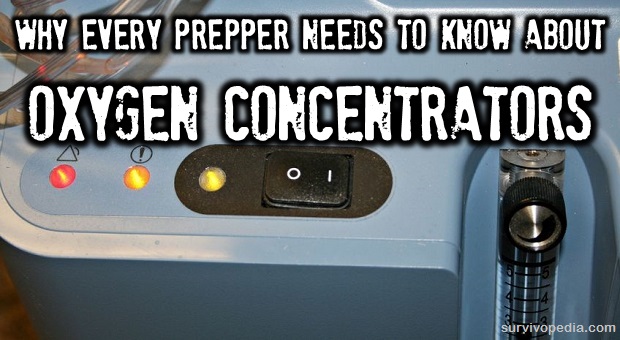 If you are in good health, or don’t go to doctors very often, you may not think much about prepping for extreme medical emergencies. In fact, most people thinking about the medical part of their stockpile tend to limit themselves to supplies related to wound care, basic medications, and a few herbs to manage some of the more commonly discussed illnesses.

There are reasons for adding an oxygen concentrator to your stockpile and keeping basic information about them in mind.

This includes knowing how to supply power to them in case of a major emergency in which conventional electricity may not be available for days or longer.

Why You Need an Oxygen Concentrator

At its simplest, an oxygen concentrator is a device that takes regular air in and then releases oxygen in a higher concentration that what is found in room air. This has an immense benefit to people who have lung problems that make it difficult for enough oxygen to enter the body. When there is more oxygen going in, then more gets into the blood, and then to organs and tissue.

Even though oxygen is not a cure for lung disease, it enables these people to live better lives, and also extends life as long as the lungs do not get worse or other problems elsewhere in the body do not develop.

If you are able to get enough oxygen from regular air, there is very little reason to need a concentrator. But a crisis situation can easily change your paradigm. Before using oxygen, make sure you understand how to measure appropriate levels for your needs, and remember that oxygen, like any other medication, can be dangerous if you don’t know what you are doing.

There are basically two kinds of oxygen concentrators available to consumers today. While both utilize the same basic mechanism, they have different values in terms of survival and medical needs

How Do Oxygen Concentrators Work?

Basically, an oxygen concentrator takes air in, and then runs the air through a canister of zeolite crystals before sending it to the recipient. At the start of the cycle, air is taken in and fed into a compressor. From there, the air is fed into a canister of zeolite crystals until the pressure inside the cylinder is almost 1 ½ times greater than room air. As the pressure increases, the zeolites absorb nitrogen, but not oxygen.

Since regular air is made up of almost 80% nitrogen and about 20% oxygen, removing this one gas element leaves a much higher amount of oxygen in the canister. The gas is released into a reservoir where pressure returns back to normal before being released to the recipient. As oxygen is released into the reservoir, pressure also drops in the first canister. It is then fed into a second canister and released back out into the environment.

Even though concentrators are very good at removing nitrogen from the air, they cannot remove carbon dioxide and other gases. As such, it is impossible for most concentrators to supply 100% pure oxygen. While modern concentrators are much more efficient, older ones that may be available at a lower price may not work as well or be as useful for other purposes. This includes using concentrators as a source of oxygen for oxyacetylene torches and other welding equipment.

If you are interested in using concentrators for alternative applications, do your research carefully and take the time to find someone that actually knows what they are doing before experimenting. Oxygen is a key catalyst for fire, and as such, you should always be extremely careful in its presence.

What Are the Alternatives on the Market?

Before modern concentrators became available, there were other ways to provide higher levels of oxygen in both home and other settings. Basically, there are two other ways to obtain oxygen:

If you do not have a choice in terms of how your body gets oxygen, then there is no question that you will need to have a functional concentrator at all times. On the other hand, even if you can generate power for them, there are some distinct disadvantages.

How Can I Best Prepare for an Oxygen Emergency?

Overall, the best thing you can do is start off by realizing that any crisis can generate a health emergency that requires oxygen either to help you get better or to simply keep you alive. This includes making sure that you know the symptoms of oxygen shortage as well as how best to treat them until you can gain access to more oxygen. Here are some common myths that you should do away with or be aware of in your survival plans:

Your next step will invariably involve purchasing at least one concentrator that works correctly plus enough rechargeable batteries to power it in time of need. Needless to say, you will also have to figure this device into any power generating plans that you may have been working on.

If you have a choice between reserving electricity for something like cooking or heating up water, you may want to reconfigure your plans so that you can run the concentrator if needed. Along with purchasing a functional concentrator, it never hurts to buy one that does not works so that you can experiment with making repairs as well as replacing newer parts with older, or vintage items that may last longer and have fewer problems.

You should also know how to generate oxygen without using a concentrator. In this step, you should know how to get all of the raw materials for electrolysis methods from natural settings. This will include scavenging for wire, different metal types for Earth batteries, and making sure that you can feed the oxygen into a suitable container.

It is very important to note that an oxygen concentrator cannot filter out other gases such as carbon dioxide or any number of other toxins. While there are special filters that can be used to filter out these impurities, they must either be placed over the concentrator inlet, your will need to feed the oxygen through a respirator mask.

There are a number of ways that you can achieve this goal. Just make sure that the inlet does not allow contaminated air to get inside the mask. When you are not wearing the respirator, you will still need some way to continue taking in air from the concentrator. If you can use a cannula, this may be better, since there will be less gear on your face. This, in turn, will allow the skin on your face to breathe and also help you remain more comfortable.

Depending on your budget, you may also be able to buy a respirator that includes a pumping system and a built in concentrator. As may be expected, these devices are very expensive, and may be hard to obtain for the general consumer. That being said, you can still do some research on these devices and see if they will be of more value to you than trying to assemble different pieces of gear into a workable whole.

Things You Should Build and Test Now

Overall, it can be said that when it comes to managing oxygen in a crisis your first job will be to provide electricity. No matter whether you choose to work with electrolysis to generate oxygen from water or you choose to power a generator, making sure that you can provide enough electricity is very important.

You can always get started with wind and solar systems, or better yet, water wheels. There is also considerable room to explore gravity motors and other “archaic” engines that can be used in conjunction with magnets and coils.

Since you may be in a very weakened state in a crisis, it may not be a good idea to think you can rely on body powered devices to keep your concentrator going. Do not forget that if you come down with a very bad cold, or your lungs get damaged because of inhaling various toxins, it may not be feasible to pedal a stationary bike or any number of other devices that might otherwise be very useful.

Once you know that you can generate enough electricity on a reliable basis, your next step will be to make sure that you can keep any concentrator up and running. This includes making sure you have good troubleshooting and repair skills.

It may also be of some help to keep some items on hand that can be bartered for repair services. Make it your business today to find out if any of your friends or neighbors is a hobby electrician or even capable of fixing small appliances. Also try to find someone that enjoys bringing old technologies from ancient cultures back to life in the modern world. You truly never know who or what skills you will find in people around you until you start asking.

As you can see, oxygen concentrators are very useful devices to have on hand. If you encounter an unexpected medical emergency, they can make a difference during a crisis period in which routine medical care may not be available.

No matter whether you are facing the aftermath of a fire, earthquake, or even nuclear fallout, rest assured that air quality will be a major problem to deal with. In situations where air quality is likely to cause damage or decreased lung function, it makes perfect sense to have an oxygen concentrator on hand. Needless to say, even if you do not need the concentrator for this purpose, you may still need the oxygen for other purposes such as welding or other industrial applications.

This article has been written by Carmela Tyrell for Survivopedia.


This post was originally published on this site
10 Ways People Will Die When The SHTF
Nepal: Plane Headed for Himalayas Crashes, Killing All 23 Aboard Flight